Rudolph, a retied French Naval officer and writer now living in Canada with his wife and four daughters, shared with us that he met Val while she was there in 2007 but that he didn’t find out until recently that she had passed away. She left such an impression on him that he wanted to do something to mobilize the French and Canadian aviation communities in her honor and in support of our foundation. Rudolph shared a eloquently  written reflection of his encounter with Val, which you can read in full here in both French and in English.He then shared this touching video tribute, created in vintage-style because he “wanted to make a link between the past WASP of WWII to enlighten the destiny of Val.” This video amazingly connects several generations of armed forces across two continents with simple images from strangers. This is a living memorial, a historic chain of memory and love between France and the US, that celebrates our heroes of past and present in a way that can inspire the future generation of young women and leaders.Read our blog post for the full explanation of the tribute.

After graduating high school, Val attended Northfield Mount Hermon for prep school before starting at the Naval Academy in 2005. Her fellow classmate and USNA graduate, Allie Burns, attended the 10-Year Reunion at NMH and had the opportunity to pay a tribute to Val in front of their classmates. Read the full speech below. 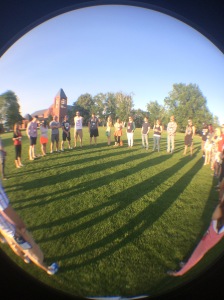 Val’s story was the first feature in the STORIES OF SERVICE: IF OUR WALLS COULD TALK video series, created by Mission BBQ, where Val’s #6 Navy lacrosse jersey is proudly displayed on the walls of their in their Annapolis location. Mission BBQ is an incredible business with meaning and purpose: to proudly serve those who serve our country… not to mention, out of this world bbq!!

Five midshipmen from the Class of 2009 who have died since graduation were honored during a beautiful memorial ceremony on hospital point at the Academy. Many of Valerie’s family members and classmates attended.

The American Fallen Soldiers Project provides comfort and healing to the grieving families of our fallen military by making available at no cost to the family an original portrait of their fallen loved on that fully captures their appearance and personality. Valerie was selected and her portrait was unveiled to her family on a special Memorial Day weekend event at the Women’s Memorial.

Vals’ portrait and bio on the website: http://americanfallensoldiers.com/navy-lt-valerie-delaney/. Her portrait was also included in the 2015 calendar.

The names of Lt. Cmdr. Alan A. Patterson, Lt. Valerie C. Delaney and Lt. William McIlvaine III were etched into the Prowler Memorial on base.

May 18, 2013:  A Celebration of Life Service at Saint John’s Episcopal Church in Ellicott City, MD

Three military servicemen and women from Maryland were killed in the month of March 2013, including Valerie. As part of their Military Appreciation Program, the Orioles invited the families of these three fallen heroes to the game to share a suite, be honored in a pre-game ceremony, have a meet-and-greet with players, and receive a personalized jersey.